Halloween is one of my favorite holidays!  I kind of love it.  The costumes, the candy, the leaves, the parties, the decorations, the movies.  I’m into it all.  But I’m not a dog!  I’m a human, with the intellectual capacity to recognize that people dressed in strangely shaped costumes are still just humans.

The other day I was walking down the street with my dog, Lola.  We were taking the usual route, except everything was not as usual.  Suddenly, in a neighbor’s yard, there was this giant, inflatable, light up minion.  You know, one of those yellow cartoon creatures from the Despicable Me movie franchise.  It had to be about 6 feet tall and 4 feet wide.  And it was just sitting there.  Not doing anything.  Just existing.  But that was enough to have Lola spooked.  You should have seen her.  Ears forward, hackles up, eyes squinting.  She was fixated on it, barking and growling.  Of course, that only lasted a moment because I was working with her to help ease her concerns and increase her confidence (a regular part of our daily walks for my agoraphobic dog). 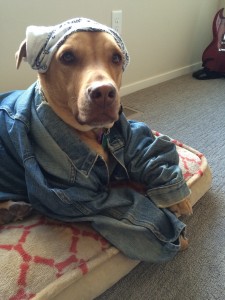 But here’s the point, most dogs don’t have a normal frame of reference for the types of strange things and experiences they will have to cope with around Halloween, and as such it tends to be very stressful for them.  Imagine, if you will, you’re a dog.  You’ve got your usual routine and you’re happy with that.  Then suddenly the following series of events occurs: (1) your family gets dressed up in bizarre outfits unlike any you’ve ever seen, (2) while dressed like something out of a nightmare mom and/or dad straps a strange contraption to your back, (3) the doorbell starts ringing, incessantly, over and over, and every time it does some new terrifying being is at the door that looks vaguely human shaped but scarier, and then finally (4) you find a treat on the ground, eat it, and get terribly ill because it turns out to be chocolate, which is toxic to dogs.

So here are a few tips to help you get through the holiday with a happy puppy.