Why Does She Do That?

A simple framework to explain your pet’s behavior:

“Why does she do that?” is a very common question for dog trainers. In fact, I get this question at least a couple times a week, often from people I’ve just met who want to understand a myriad of doggie behaviors from sniffing butts to barking at the mail man. Surprisingly, though, people rarely ask me why their dogs present with problem behaviors. Instead, many people seem to already have decided why their dogs are engaging in unwanted, nuisance or destructive behaviors. While these explanations are frequently intriguing, they usually say more about us humans than about our pets. We pet-owners tend ascribe human feelings and motivations to animals whose emotional lives, while rich, are not ruled by the kinds of high-level thought of which humans are capable. For instance, vengeance, spite, guilt and disrespect are uniquely human experiences. I bring up these in particular because I hear them a lot. But the explanation I hear most is that a dog is being “dominant.” While dominance and social hierarchies are not specific to the human experience, modern science has widely discredited dominance theory. What a relief to know that our dogs are not motivated by some all-consuming obsession with ruling humanity as our canine overlords! For more on a modern understanding of Dominance Theory, see the American Veterinary Society of Animal Behavior’s position statement on dominance.

So if our dogs aren’t being vengeful or dominant, what is motivating their actions? The answer is usually that your dog’s behavior occurs because it works!

Most dog behaviors are the result of a combination of instinct or emotion and learned consequences. When I say learned consequences, I’m essentially referring to the perceived outcome of specific behaviors. A behavior is reinforced if the perceived outcome is desirable; a reinforced behavior is more likely to recur in the future. Consider the classic example of teaching a dog to sit. Most dogs learn quickly that humans like when they put their butts on the ground. The reinforcer can be food, play, attention, you name it; it just has to be a desirable outcome for the dog. One technique, which I do not recommend, involves applying an upward pressure on the dog’s leash or collar, which the dog generally finds unpleasant, and then releasing the pressure when the dog sits. The release of pressure is a desirable result, which means the behavior is reinforced. Once again, I do not recommend this method because it causes unnecessary stress for many dogs and is a slower method of teaching than using a more positive approach. So why did I bring up this technique? Because it’s an example of negative reinforcement: the concept that the removal of an unpleasant stimulus can be a desirable result which reinforces a behavior and makes it more likely to recur.

So when we look at how dogs acquire new behaviors it generally looks something like this:

Behavior Acquisition. This framework, of course, isn’t exclusively applicable to dogs. This is generally how all animals acquire new behaviors, even humans!

With this framework in mind, let’s consider a couple more complicated examples:

Destructive chewing is most common in dogs who present with separation anxiety. Many dogs feel acute stress at being separated from their human companions. Dogs experiencing this stress will often seek ways to self-sooth and one of the most common ways dogs sooth themselves is by chewing. The chewing reduces their anxious feelings, which is a removal of an unpleasant stimulus, thereby reinforcing the behavior of destructive chewing when left alone.

Attention Barking is most common when a dog is under-stimulated. The resulting feelings are generally boredom or loneliness (but personally, I believe boredom is the most common cause for this behavior). When the dog barks, if the owners give the dog any attention, then barking is being reinforced. Even yelling at a dog to be quiet is a win for a dog who’s barking for attention. Basically, anything other than ignoring, turning away from or walking away from your dog is reinforcing the behavior of barking for attention.

Of course, this framework can’t explain every single thing every dog has ever done, but it does explain the majority of our dogs’ repetitive behaviors. In other words, your dog is doing that because it works! 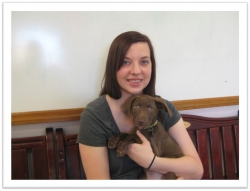