The Science of Yawning

My dog LOVES head massages.  She leans in and gets this blissed out expression on her face, and if you stop, she’ll push her nose into your hand to encourage you to continue.  It’s one of her most endearing (and pushiest) behaviors.  She also yawns.  Not one big yawn, but a half-dozen micro-yawns followed by a medium sized yawn.  It’s a different sort of yawn and it made me want to get a better understanding of the physiology of yawning.

If you’re a student of canine body language then you probably already know that yawns, when performed by dogs who are not sleepy, are usually indicators of stress.  My dog has a stress yawn, and it’s giant.  When she stress-yawns, it’s a gaping yawn where her jaws get wide enough that I can see straight down her gullet.  She looks like Geena Davis in Beetlejuice, in that scene where they gave her the craziest Tim Burton makeover. 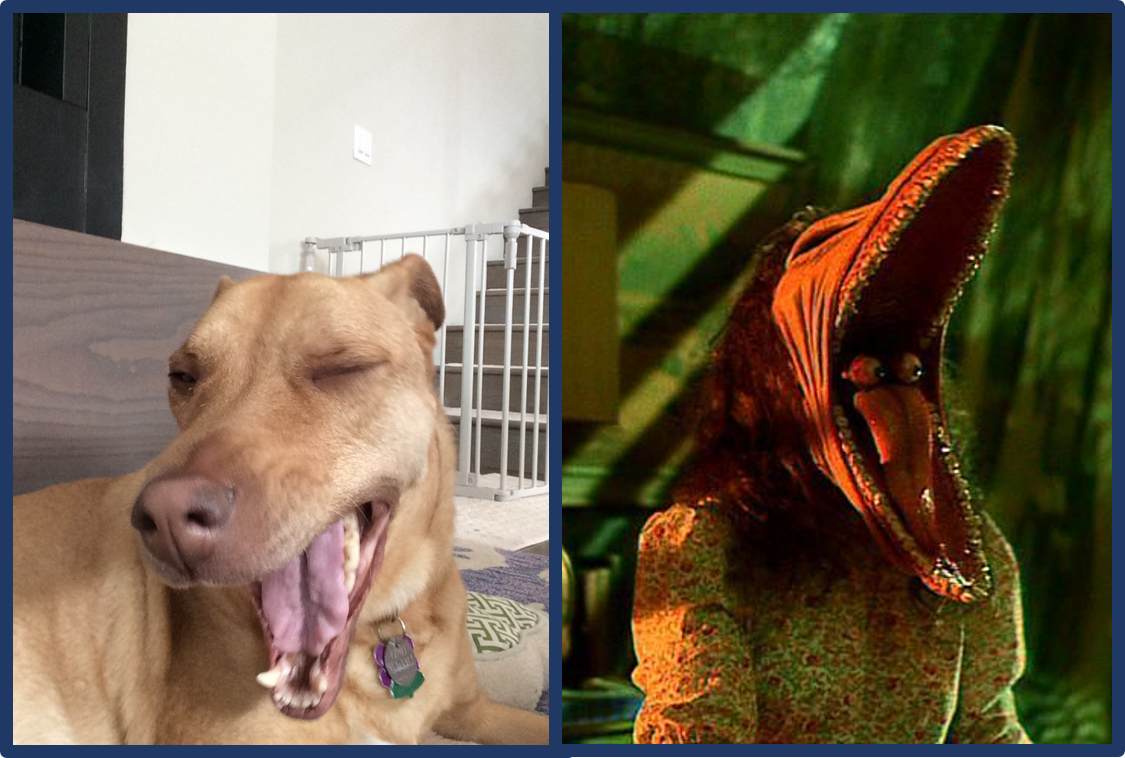 Physiologically, I’ve always understood stress yawns as the body’s way of preparing for fight-or-flight.  In canine body language terms, it’s also an important communication tool.  It tells other dogs, I’m stressed about this situation and well-socialized dogs who spot this will often back off in response to give the yawning dog more space.

Of course, everyone knows that animals yawn when they’re tired.  Yawning is common for dogs (like people) before and after sleep.  And yawns serve a poorly understood social function in this context as well, which is why yawning is so contagious.  Dogs who are socially bonded to other dogs or people will often yawn in response to seeing a family member yawn.  In fact, yawning is so contagious that just thinking about it will make many people yawn.  At least half of you will have already yawned since you started reading this.  But since yawning occurs in most animals regardless of their sociability, scientists are pretty certain that yawning’s social function is secondary to the physiological.

So I went looking for the latest, greatest studies on the physiology of yawning.  And guess what?  It appears that the most plausible current theory about the physiological purpose of yawning states that yawning happens in response to spikes in brain temperature and functions to cool the brain.

So here’s what we know to support this hypothesis:

There are a couple other scientifically demonstrable results of yawning that I’d like to mention.  Most notably, yawning is also associated with increases in sympathetic nervous system function and arousal levels (alertness).  This certainly explains why we yawn when we’re waking up and when we’re stressed.  In both situations, we are preparing for increased activity.

Still, none of these noted physiological functions provided an obvious explanation for why my dog yawns when she’s getting a head massage that she so clearly enjoys based on every single other bit of body language.  I decided to look a little closer at what the physiological effects of the massage might be.

Unfortunately, there doesn’t appear to be much widely available scholarly research about the physiological effects of massage.  What I was able to learn is that there are some indications that massage meant to promote relaxation will, in fact, cause the heart rate to drop.  Not exactly earth shattering, given that our heart rates elevate in response to stress and drop in times of relaxation, but at least there is some scientific evidence to support the concept.

With this perspective on the massage, I finally had a theory!  Perhaps my dog finds the head massage so relaxing it causes an almost instant drop in her heart rate, which in turn reduces blood flow to her brain, which in turn means her brain starts to warm (as though she were about to sleep) and her yawns really are about thermoregulation of the brain.  It’s a possibility.  And it ties in with one of my favorite theories on yawning: the state-change theory.  This theory has been promoted by scientists who noticed that yawning occurs most in moments of transition.  They believe that the yawn’s physiological function is to prepare the mind and body for the new state of being.  I suppose, it’s almost like rebooting a computer in a way, getting the hardware back to a neutral state, ready for whatever comes next.  Perhaps my dog’s head-massage-yawns are little more than an indication that her state is changing.

The only puzzle I have left is why these yawns look so different to her other yawns.  Her stress yawns are these gaping exaggerated things, often accompanied by a high pitched whine.  Her sleep and wake yawns are moderate affairs, not as wide as a stress-yawn, usually performed singly or doubly, typically accompanied by a stretch.  But these head-massage-yawns.  They are something completely different.  As I described at the start, she’ll do these little micro yawns almost like her lower lip is quivering, followed by one slow medium sized yawn.  Her eyelids droop as her facial muscles relax more, while simultaneously leaning into the head massage further.  Perhaps I will never know why, but it seems likely that each of these yawns looks different because each is meant to communicate something different.  So far, in canine body language, we classify yawns as sleep-related or stress signals (also known as calming or appeasement signals).  I’d like to suggest a new possible classification: a “bliss yawn.”  In any case, that’s how I’m going to think of it from now on.

If anyone else has a dog who does this, let me know about it in the comments!

“Changes in Physiology before, during, and after Yawning” by Timothy P. Corey, Melanie L. Shoup-Knox, Elana B. Gordis, and Gordon G. Gallup, Jr.  http://www.ncbi.nlm.nih.gov/pmc/articles/PMC3251816/

“Massage and the Autonomic Nervous System” by Tim Noonan.  http://timnoonan.com.au/resources/health-and-wellbeing/massage-and-the-autonomic-nervous-system/

“Yawning and its Physiological Significance” by Sharat Gupta and Shallu Mittal.  http://www.ncbi.nlm.nih.gov/pmc/articles/PMC3678674/

3 Responses to The Science of Yawning